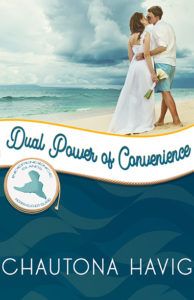 When Richard Danforth inherits the family estate on Merriweather Island, he doesn’t have time to deal with it—especially not from halfway across the globe. He’s too busy working to become the world’s newest billionaire and avoiding the women who would detract him from his goals.

Enter Lyla Santana. Fresh out of Oxford University with a degree in antiques and a relationship that nearly killed her to leave, she’s eager for the isolation and treasure trove that is Danforth Hall. Lyla also is determined to avoid men at all costs. Forever.

It was supposed to be a match made on paper. With him halfway across the globe, they’d never have to see each other again.

So, what’s Richard doing on Merriweather just weeks after the wedding? And how will his arrival test Lyla’s faith, not to mention stretch their so-called relationship?

In a twist on billionaire romance and marriage of convenience, this “Merriweather book” kicks off a new series featuring five islands, six authors, and a boatload of happily-ever-afters.

Dual Powers of Convenience by Chautona Havig is the first book in a new six-book series published by Celebrate lit called the Independence Islands (Merriweather Islands). There is a prequel book that I have not read yet… but I will 😊

If you’ve read any books by Chautona Havig before you know she writes with dry humor, sarcastic bends, and faith filled truths. This time she added to that with a bit more of a romantic twist all without losing what makes her books unique. Both Richard and Lyla had rough starts, thrown together by circumstances that showed God really was watching out for them. They learn about each other and learn to face their fears as well. I liked how Richard was consistent in trying to win over Lyla, he did the little things that make your heart happy. I also enjoyed how Lyla grew as a character through the book, from a somewhat nervous and timid person to someone who had the strength to drive over the bridge at a normal speed 😊.

“Maybe that’s proof of maturity when your words are truly ‘seasoned with grace’ instead of only making sure they sound like it.”

The setting of this book centered around Island life, and it closely related to that of small-town life. From the community knowing everything about you to their willingness to help in times of need, Chautona Havig managed to convey just the right amount of small-town life without making it feel over the top. I also enjoyed the idea of the mobile book & coffee truck, it made me start thinking… It was a great addition to the story that helped move certain parts of it along.

An all-around enjoyable read! I give it 4 out of 5 stars for the creative clash of tropes, the humor, and for leaving me excited to see what else will happen on the islands. The only thing I would have liked to have seen was more of a background on Richard and his story (which may be in the prequel I have yet to read).

Y’all totally need to read Chautona’s comments down below, I was smiling from ear to ear after reading them. 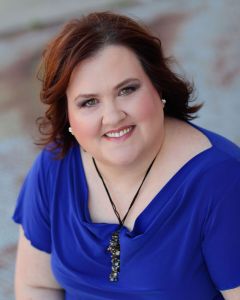 Chautona Havig lives in an oxymoron, escapes into imaginary worlds that look startlingly similar to ours and writes the stories that emerge. An irrepressible optimist, Chautona sees everything through a kaleidoscope of It’s a Wonderful Life sprinkled with fairy tales. Find her on the web and say howdy—if you can remember how to spell her name.

Did I Really Agree to Write a Romance Series?

When my fledgling little idea for a single book transformed into a series that then transformed into a SERIES, I kind of missed the part where I agreed (and likely suggested, if truth be told), that the books should be contemporary romance.

There’s just one problem? I rarely write a straight-up romance. And if I do, it’s usually a short novella in a collection—often at Christmas.

Despite nine kids and being married for almost thirty-two years, I am THE most unromantic woman on the planet. No habla amor. Or something like that.

So there I was, toodling down the 395 (a treacherous bit of road between my house and the publisher’s) when all of what I’d agreed to exploded in my brain. I’m still scraping brain matter off the windshield and trying to stuff it back in. I need every last one of those “little gray cells,” thank-you-very-much!

Romance. My heart sank. Boy meets girl. They like each other. They fight. They get back together. They live happily ever after.

It’s a thing, folks. A formula. And if you deviate, true romance readers get annoyed. What was I going to do? I didn’t want to write romance. Not really. I had ideas. The prequel book had been all about trying to bring a young woman back to the Lord. That’s more my speed, okay?

The ones in my head, I mean. The tires still rolled along the ground. Fortunately, my cranial explosion hadn’t caused an accident or anything. Just in case you were curious.

I considered making each one loosely related to a fairy tale retelling. I’d have a Cinderella story, a Beauty and the Beast, a… nope. That made it that far and I just couldn’t. The minute we got to Sleeping Beauty, I’d have my readers in comas. No. Thanks.

Next came Rom-com. We’d make it funny. All the stuff that happens in beach romances gone wrong. Why not? We live once!

I was yawning before the thought finished forming.

Right about then, I think, is when I wondered what kind of tropes I needed to consider.

See, romance tropes are a thing. I even talk about them on my podcast. The tingling sensation that comes when a good idea is brewing happened. A grin formed.

Tropes. I’d play with tropes. I’d take all those familiar things and twist them somehow. Why not? It would be fun.

Right about then is probably when I began recording my ideas. Creosote and sage whizzed past at breakneck speeds (let me dream. I’m not a speed demon, but c’mon… for the sake of poetic license and all?). And the ideas whizzed faster (no license needed. They really did).

Book 1. Marriage of convenience. I mean, those are always fun, right? So why on earth would someone need to get married?

Every idea I came up with has been done… and done again.

That’s when I upped the stakes. Authors do that, you know. We come up with a way to torment our characters, and then we say, “Okay, now how can I make this worse? Nope, I need it even worse. Oh, and…” Bam! The story goes from interesting to can’t-put-it-down. All because we’re not afraid to be cruel to non-existent people. Score!

How’d I do it with this one? I added in another trope. One I personally just can’t “get.” People love the things, and I’ve got no idea why. But it answered my first question of why someone might need a marriage of convenience or… as my gal puts it… “a paper marriage.”

Yep, you read that right. I wrote a “billionaire romance.” Sort of. Now, if I could figure out how on earth I’d take two people on opposite sides of the world and get them together.

Oh, yeah. I did it. And even more than that, I love it. I made my characters do some stupid things. I really did (you know, like how two Christians didn’t even pray about their marriage decision? Like how they didn’t even ask if the other person was saved? Why should they? They’ll never see each other again… they said. Ha! The Lord had other ideas. Sorta. This is fiction, right? Oops! I suddenly feel like that crazy Kathy Morningside in Miss Congeniality).

From Adelanto to Kramer Jct., I planned out that first book—Dual Power of Convenience.

(the title gives away that reason for marrying, no? Also, links may be affiliate links that provide a small commission at no extra expense to you.)

It was almost too easy.

Then I started playing with the next ones, and the series became a reality to me.

– Dual Power of Convenience—when a woman too afraid of men goes to work for a man who is too busy making money to want anything to do with that whole marriage and family thing.

– Bookers on the Rocks— This couple’s marriage is on the rocks (that’s the trope, of course), and neither of them has a clue. They’ve been married for twenty-five years, neither is having an affair, no one wants a divorce, life is good, so why is it on the rocks? You’ll see…

– Directing Hearts— The Crawforths got tricked into allowing a reality matchmaking show film on their islands. Brooks Crawforth tangles with the director until their verbal battles turn into a different kind—a battle for their hearts (enemies to “lovers”)

– Just a Memory— In this one, Mallory Barrows (who makes appearances in all of the books) comes across an old journal that tells a story she’d never heard. It’s the old Patti Paige song “Go On with the Wedding” but over forty years later! Mallory knows something that might just create a (here comes the trope) second chance at romance.

–Printed on Her Heart— After being instrumental in so many couples’ relationships, it’s Mallory’s turn in this dual-trope story. In this one, we get a mashup of friends to more and love at first sight. Can’t wait to share it. Squee!

Okay, that’s the deal. Yes, I really did agree to write a romance series.

And yes, it probably was my idea.

I might deny it to my dying day, but it is also a whole lot of fun… so far. 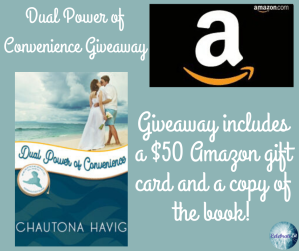 To celebrate her tour, Chautona is giving away the grand prize package of a $50 Amazon gift card and a copy of the book (winner’s choice of eBook or paperback format)!!

Be sure to comment on the blog stops for nine extra entries into the giveaway! Click the link below to enter.

For Him and My Family, August 7

Because I said so — and other adventures in Parenting, August 8

She Lives To Read, August 10

Adventures of a Traverlers wife, August 11

The Meanderings of a Bookworm, August 16

Spoken from the Heart, August 17